Today is a good day, because when I post this update it means the backer beta has gone live! So, if you’re a backer and had access to the preview version you can now play the beta version!

It will be hosted again by the awesome folks at humble bundle. Just like with the preview version, you will be able retrieve it with the key resender. Or if you made a humble bundle account, you should be able to access it through that if you clicked ‘claim this page’ when you downloaded the preview from them.

But while we’re waiting for them to host, I’m going to send all backers a kickstarter message with a temporary dropbox link- so you can play right now! 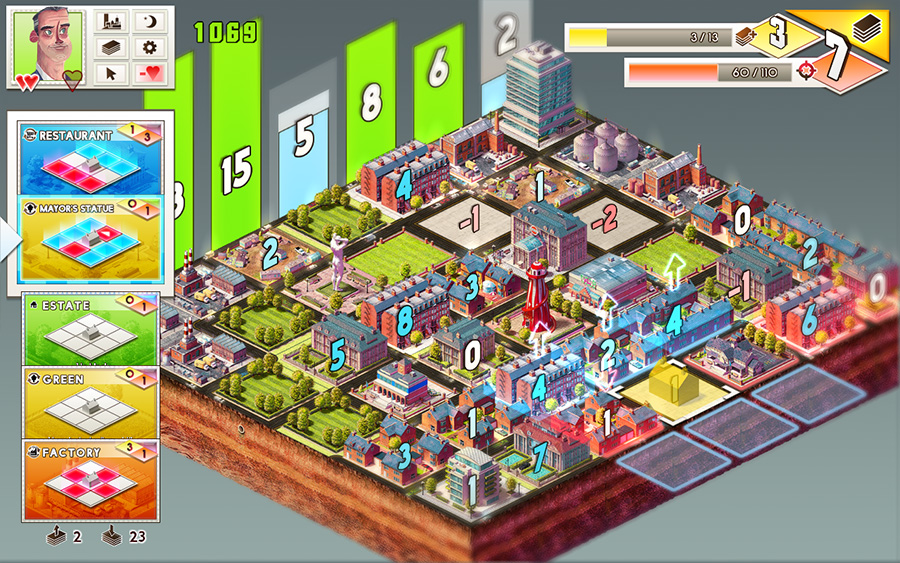 There’s such a leap over the preview version it’s hard to know where to begin. The whole game has been tightened up, there’s load more buildings and the introduction of playable characters and a whole new game mode! Here’s what’s in the beta as of today:

-120 buildings, 135 cards.
-3 playable characters, each with around 20 unique skills.
-The first 9 levels of the story/campaign mode
-A ‘custom game’ option with 2 playable game modes- solo and versus.
-Easy and Hard AI to play against with versus mode (each character AI has their own playing style!)
-6 Unlockable buildings

I’ve had some time to play test it and I don’t *think* there are any game-breaking bugs. There will be the occasional glitch, and maybe you’ll come across something I didn’t. The ‘classic’ mode and ‘load game’ are currently disabled as there are some issues with them, although you can ‘save & exit’ and ‘continue’ your game.

The AI is still on the tough side! Easy is fairly challenging, and Hard is a bit of a nightmare!

So I hope that keeps you busy! There is still more for me to do- implementing the rest of the playable characters and buildings is perhaps the most obvious. In theory that should go relatively smoothly as I now have the fundamentals in-place. 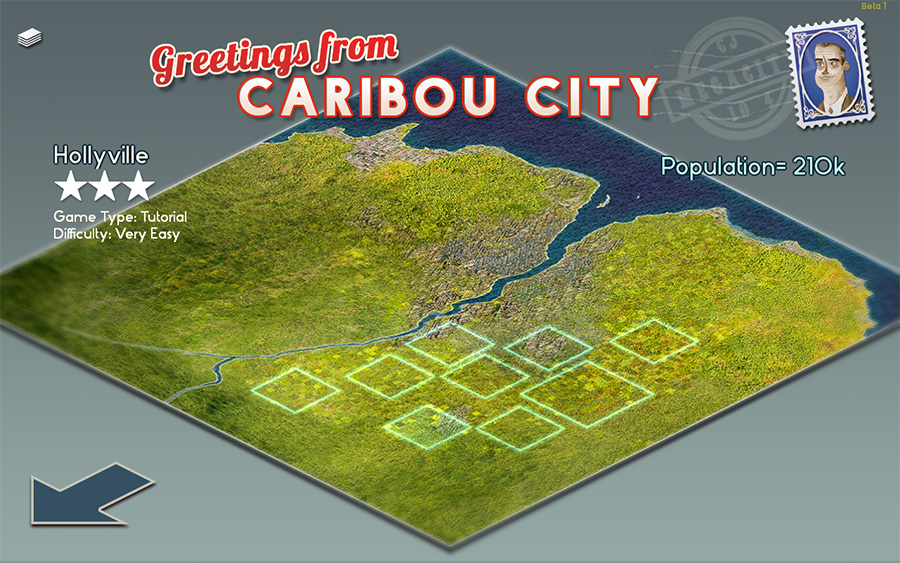 I’m pleased with how the campaign mode is developing. It’s focused around building ‘Caribou City’ through it’s difficult transition to a new mayor. Along the way you’ll meet and unlock the characters by completing a series of pre-set levels. The levels contained in the beta are largely focused around teaching new players how to play. By spreading the tutorial out over a few of these and letting the player play with the basic concepts of the game first, I think I’ve improved a lot over the bare-bones tutorial I had previously.

I’ll finish with a quick Q&A which I hope will cover everything else:

There are only 2 playable characters in my game!
You have to unlock #3 through the campaign mode- after beating level 9.

Can I stream the beta on Twitch/Youtube?
Absolutely! There are no restrictions on this at all. Just be aware that the beta is currently limited to just backers and press, so any viewers wanting to play will have to wait a bit for the full release.

When do you think the full game release will be?
My original intention was to get the game done this month- but that intention was based around basically adding the rest of the content to the preview version. I received a load of good feedback from you guys from the preview version -*loads* of awesome ideas plus a few of my own I wanted to change and add. So, over the course of January-March I decided to revamp a lot of the core game, which was definitely for the best as the game plays a lot better than the preview version ever did. But it has come at the cost of delaying the game a few months. I wasn’t originally going to do a beta version, so this is my form of appeasement- I want to give you something to play in May! I’m currently aiming for a full release towards the end of the summer and shall continue regular progress updates until then.

Any word on night mode/voice acting/extra characters/buildings (ie stretch goals)?
They still are coming, absolutely! As stated in the kickstarter, I want to deliver these in the form of a free update after release, as they are significant additions that will take time and I don’t want to delay the game further. With the exception of the 2 extra characters, who will be in the first release as I want to add them as part of the campaign mode!

The game is too easy/hard, or x card is too weak/powerful
There is a significant amount of balancing still to be done on the game. My priority right now is getting all the content in the game and making sure everything works. I do a little balancing here and there when I get time to play test, but most of the balancing issues will be dealt with towards the end of the project (and will likely be an on-going process after release too!) If you have suggestions however, please feel free to get in touch.

Can I report a bug?
Yes, I’ve set up a bug tracker here. I may not be able to respond to each report, but just know that I will definitely read it and thank you for reporting it!

X option doesn’t work
The options menu is still a work in progress- most things work but some don’t. There will also be more options in the final game, specifically controller options and colour options.

I can’t see my backer/building name in-game
The beta is using a backer name database from March, so if you’ve submitted your backer naming requests recently, it’s likely not in the beta. Rest assured, all submitted backer names will be featured in the final game! I also have to work out how to put all your names in the credits, that’s still to do also!

As promised, I have some details on the beta version I’m going to be rolling out to backers as a result of the delay of the final release until the summer.

I plan to have the beta ready in aprox 2 weeks- giving me enough time to iron out the worst bugs.

At time of writing, the game contains 3 fully playable characters- each with their own skill tree with 20 unique skills. A good portion of those skills are unique cards and buildings, while the rest have other various effects on the game.

You can play using these characters in solo mode (the game mode found in the preview version), or against the AI/local multiplayer in the new versus mode. The AI also plays differently depending on which character it’s playing as! I’m really pleased with the AI right now- I’ve spent most of the last week improving it and ironing out oddities in it’s decision making. It’s tougher than ever but I do plan on making some easier variations too before the release of the beta.

As for the buildings, there are currently 135 cards ready for the beta, with 120 of them being buildings! That’s up from the 50 cards in the preview version for comparison. I’m quickly approaching the target of 150 buildings for the full release (with free expansion to 200 post release).

It really is a much, much tighter game than the preview version- I can’t wait for you all to play it! It’s already hard for me to not sink a lot of time into playing right now which can only be a good sign. I’m currently addicted to playing the solo mode as last week’s character Giles– trying to build massive farms is fun.

It’s very likely there will be a bit more content included with the beta than what’s listed above- but take this description as a minimum of what to expect. I’ll also do a mac build, but this will arrive up to a week after the PC build- the PC version needs to be functional before building for mac.

Now the core gameplay is solid, the AI more or less complete, and the first batch of playable characters complete, I want to start putting together the story mode. In particular I want the first few levels to be a gradual introduction of the game mechanics, and act as a tutorial.

Since there are a lot of mechanics to teach, I came to the conclusion that a gentle learning curve would be best for Concrete Jungle as opposed to the preview version tutorial which tells the player rather than shows. I want to do something akin to the first levels of Plants vs Zombies, where you start out with the very basic mechanics, but crucially you are still playing the game- not just being told what to do. Gradually more and more complexities are introduced until you are comfortable with everything. That’s my goal.

Also the official deadline has been reached for backer building name submissions! If you haven’t submitted, do it quick– this is your last chance! As promised I’ve started working on the three top tier backer requested buildings. This week we have Camelot Castle requested by Laurence O’Brien. How could I say no to an epic Arthurian castle to go in the game?!

I’m going to take an update break next weekend so I can focus completely on getting the beta ready. See you in 2 weeks with something awesome to play!