In this dev blog I’ll be talking about how the game is progressing, the first pass of interface graphics and design, as well as a few new ideas I have.

For the art style, I’m going with pixel art for 2D interface graphics, mixed with voxel style 3D buildings and 2D sprite characters. I’ve always been fond of the pixel art style, the interface reminds me of the management genre’s golden age in the 90s (memories of Bullfrog games spring to mind). One fear, however, is that it’s not an ideal fit for the amount of information I need to display on screen- it’s a fine balance I’m going to have to get right. 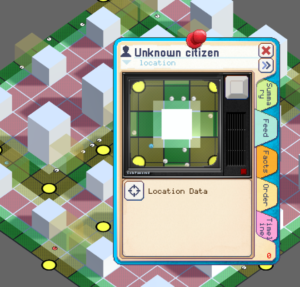 I’ve been mulling over a new fascinating inclusion to the game. A lot of the game involves time passing, although an essential resource, there are periods where there’s not really much for the player to do (while waiting on those lab results, etc). This is typical of the genre and isn’t really an issue because similar games will just speed up time by several factors and pause when something interesting happens (eg. XCOM). This is what happens in Shadows of Doubt at the moment, and it’s absolutely fine. BUT…

Currently, there are isometric and top-down view options only. I’m going to have to make the game pretty anyway, and the 3D city is right there, with all the citizens in their simulated glory. Why not just let the player walk the streets in those phases of ‘time passing’? All it would need really is a basic FPS controller. I think being able to walk the streets could add a real connection to the city and its population.

How cool would it be to spend your time waiting reading the morning’s newspaper in the greasy spoon across the street over coffee? Or staring out your rainy office window overlooking the city while you wait for your agents to perform an interrogation of the prime suspect. There’s something irresistibly noir about that, and I’m going to have to pursue it to some degree. Especially since the game already requires a lot of those assets to be suitably detailed and constructed in 3D anyway.

Trouble is this is a potential huge rabbit hole in an already-ambitious project. Where do you stop? If you can do this, why not just let you go to the crime scenes and do everything yourself like a true first-person detective game? As awesome as that sounds, the line will have to be drawn in the sand somewhere. At the moment, the first person element is purely going to be an optional ‘time waster’ element that lets you feel more immersed in the game world.

It’s going to be a challenge of course to create this world. At the moment the city is procedurally generated using a semi-but-not-overly complex system involving building density and zoning. For now I shall iterate on that generation, but later on, I’m leaning towards having the city as more of a designed element of the game. A city level editor at a later date would be a great inclusion, opening the game up to user-created cities, while keeping procedural cities as an option to the player.

I’m going to be pursuing that ‘optional’ design philosophy throughout the game. For example, all documents will also be procedurally generated and there for the player to read if they want to- but they don’t have to. The useful bits of information are summed up in a handy list-style subsection, and represented by visual icons (think if somebody has summed something up via bullet points). It’s really easy and digestible for the player– especially since the icons can link to another bit of evidence. Mouse over them and they’ll tell you the fact; “Joe Burns lives at 3 Cedar Drive”. Click on it and it’ll bring up the file for Cedar Drive (or Joe Burns if you are clicking on it from the Cedar Drive file window). But the extra detail is there for those that really want to get lost in the case- you can read the rental agreement between Joe and his shady landlord that the ‘fact’ came from.

I love games like Deus Ex and The Elder Scrolls games where, if you want to, you can spend hours reading books- or more typically notes and other forms of interaction between NPCs. The love of those moments is one of the reasons I decided on this idea as my next project, and I plan to fill Shadows of Doubt with the same kind of detail.

Hi all! In this 2nd development blog installment, I’m going to talk about the project’s development during the past year or so; the problems, how I’ve overcome some and am still battling others.

Truth is the development of this game so far has been tough. With most games you can develop mechanics and test them in a reasonable amount of time, from there you can start to hone and adjust until you have something playable. At this stage, you can be reasonably comfortable in what you have and proceed to add art, sound etc. With Concrete Jungle I had a pretty good prototype ready in a matter of months (admittedly after a long time trying different ideas), and something representing the final game quite accurately by the time I did the Kickstarter.

Shadows of Doubt has been much harder to develop because the entire premise of the gameplay hinges heavily on the integration of procedural systems. In order for the game to function as intended I need:

1) A whole city of citizens to play out their simulated lives. The game needs ways of ‘recording’ what happens, so the player can uncover evidence at a later date. I’ve got in-depth plans for this. The big one to tackle first being citizen memories/eyewitness accounts – who’s seen who, when, and where. This is actually a huge amount of data for the game to process, as it needs to record everything. 99% of the stuff it’s recording will never be seen by the player because chances are they have absolutely no reason to question Mrs Rogers, 83, living at Sycamore Terrace with her cat Percy. There’s probably no reason to uncover her credit card accounts or rifle through her trash. But the game needs to simulate it anyway because it’s all about open-ended possibility.

2) An AI killer to commit a murder -preferably with some kind of motive. They need to have some evasive ability (ie lie to cover up where they were should they be questioned). Right now nobody lies, so if you happen to question the killer, they’re like “oh yeah I was there, I totally killed them”.

3) A simulated citizen to find the body and report it. This one is pretty self-explanatory. Its initial implementation is basic and works about 75% of the time- because right now it’s possible that a killer will kill someone living alone (sorry Mrs Rogers), and nobody will ever find the body. In earlier builds, I overlooked that the killer could ‘find’ the body, which resulted in them reporting the crime as soon as they’d killed them. Combined with the inability to lie, this made for one very easy detective game!

4) It needs at least a semi-functioning management system where you can assign detective teams. This is where the player’s decision making starts to surface.

5) It needs an orders system which allows the player to interact with the world and the citizens. Eg. Questioning to see who a citizen has seen recently, where and when. Basically a way of gathering information, as well as other resources.

6) The game needs to introduce constraints and challenges to keep decision making relevant and interesting. This is something I’ve had to learn about through trial and error in previous game development adventures. Choosing who to question next doesn’t mean anything if you can just question as many people as possible with no consequences. Introducing constraints is the key to making those decisions mean something. The core one is time; citizens’ memories are constantly getting fuzzier, and public opinion may turn against you if the killer strikes again.

7) It needs a compelling hook to keep the player playing. In this case a progression system. Usually, the progression will work to ease the above constraints in some fashion, but in a way that makes progress feel real when in actual fact it’s more or less in-line with the game’s difficulty curve, giving somewhat of an equilibrium effect.

8) There needs to be peril. This is somewhat of a personal preference, but in most of my favourite games, there is always something important to the player at stake. Usually a risk of death of one or more characters that the player has been working hard to progress. In a game about catching murderers, it makes sense to have that risk of your agents dying- but the implementation is tricky since you aren’t directly controlling any combat/dangerous scenarios. One of my first instincts early in development was to have an ‘apprehend’ stage of the game where the aim was to capture the suspect- perhaps via a turn-based tactics minigame or similar. While that would be really cool, I feel like this is too big a commitment for an already ambitious project, so I’m going to have to find an alternate solution. I’m not sure what yet. Maybe the threat of citizens being murdered is enough. What I absolutely don’t want is have a risk of losing an agent without any input from the player- there’s nothing more infuriating than losing a favourite character because of RNG.

Once I have all of the above functioning, I have my game. It’s probably a bit naive for me to think this is as challenging as game development gets, but it sure feels like it!

It’s #7 that’s got me thinking recently- is the real hook of this game going to be the management-style progress system? Or is the hook simply the emergent story of the cases and ‘whodunnit’? Is it both? The plan was always the former, partly because even though procedural generation fascinates me to no end, I was not confident enough in it (arguably my implementation of it) to depend on it to tell compelling stories. Ideally, you’d still have fun managing your department even if some of your cases are super straight-forward and have no twists and turns. It’s still my plan to depend more heavily on the tried-and-tested mechanics of the management genre for the core experience, but as the emergent cases have been occupying so much of my time it’s impossible not to at least hope that they will add a lot to the experience. We’ll have to see.

Despite the above sounding probably way-too-ambitious for a small team, yet alone a sole developer, I’m having so much fun making this game! It is slowly getting there– at a snail’s pace, but it’s still going to take a little while longer before I’m truly glimpsing the light at the end of the tunnel in terms of playability. It’s more like everything is slowly coming into focus.