Hello all! I have returned from demoing Concrete Jungle at EGX Rezzed this week, it was such a fantastic experience!

There’s been a lot of love for Concrete Jungle, and I met a few backers and general fans too- everybody I talked to was really friendly and enthusiastic.

Concrete Jungle is not the easiest game to demo during a show, due to it taking a little while to learn how to play. It’s definitely more of a ‘sit down and sink your teeth in’ kind of game rather than something immediate you can just pick up and play. That said, those that played really got quite sucked-in, which must be a good sign!

Watching others play your game for the first time is a valuable experience- I’ve learned a great deal about my own game and more importantly I now have some solid ideas on how to make it easier to play and easier to learn. I’ll summarize just a few key things briefly:

–Click and drag building placement is a must! A lot of people’s first instincts were to click and drag the card over to the grid to build it (a feature that was on the to-do list as it has been suggested by backers too). With the benefit of hindsight I really wish I’d put this in the demo build for rezzed! It’s one of the first features I’ve added to the game since getting back- so it’s already now supported in the game.

-Throughout most of the show I was running the versus game mode, in which the player plays the AI. Due to the nature of development, it makes sense to develop a really kick-ass AI that is as good as it can be before then making easier versions of it (making an AI dumber is easy!) So at rezzed I had new players playing against what is quite a formidable AI. Kudos to the 3 people who did manage to beat it though!

–Tech levels need to be balanced. In aforementioned versus mode I’ve realised the player levels up their technology (access to better cards) much more slowly than the solo mode due to the nature of the turn-based system. So what I’ll do is make this progression faster in versus mode so we can have games against the AI featuring all the really cool high-level buildings like skyscrapers! Due to this they were sadly lacking from the games played at rezzed.

-Where possible, I want it to be visually obvious what your current placement is going to effect. I’m already doing this with the +/- area effects, but there’s room for improvements, especially with the economy and target values.

-And speaking of the economy and target values, even something like mousing over the orange bar to reveal a link to the height of the columns which it represents should make it easier to immediately understand.

–Versus mode uses similar mechanics to the solo mode, but instead of just clearing the left column, it’s about ‘winning’ a column by having more points in it than your opponent. There are a couple of rules here since the target value is still a factor (you need to reach your target to claim victory over a column and win all the points in it). I’ve got ideas on how to better illustrate this using the UI.

-In addition to all of the above, I want to spend time making a really solid, enjoyable tutorial that eases the player into the game. The current one is just an updated version of what was in the preview version, and there’s a lot of room for improvement.

There are a load more things on my list, but those are some of the main ones. I’m already working on them in preparation for the internal alpha build which I hope to have ready at the end of the month.

All these changes though unfortunately, are having a bit of an impact on when I hope to have the game completed. My original target was May, so I’m going to officially move than forward a little to Summer. What I’m going to do instead though to make up for that, is have a beta version set up and available for any backers who want to play it in May.

Anyways, I’d better get back to work now! See you next week!

I’ve been working non-stop to put together a build ready for EGX Rezzed this week. It’s great seeing this game start to come together! In terms of the whole project, I’ve still got a lot of content to add, but the core elements are now in-place after going back and refining a load of them thanks to your feedback.

As well as the gameplay changes I’ve made in previous weeks, I’ve updated the UI this week also with ideas from you guys: 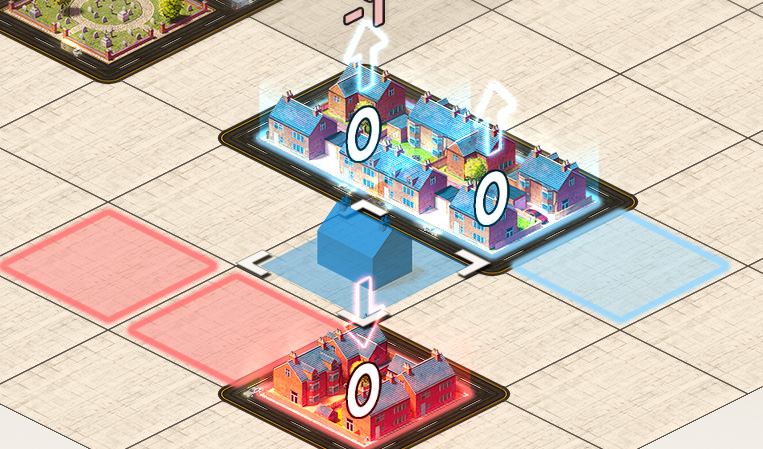 There are now (animated) arrows that hover over point collecting buildings when they will be affected by what you’re about to place. This is a *great* addition, and you have backer Joel Finch to thank for the idea. It not only makes things clearer but I think it actually helps make the game easier to grasp for new players.

Next up, I’ve also made the tile brightness change in accordance to it’s score. This mainly effects empty tiles- again, it’s a visual hint that helps increase awareness.

One final change this week, which is one of those things which I should of implemented right from the start- I should of even put it in MegaCity. It’s essentially a finish line. In addition to the endless mode found in the Preview version and MegaCity, there is now also a non-endless mode which is actually winnable. Now finally solo mode is not just an endless survival type mode!

It’s really simple, if you clear columns up until the designated line then you win the level, if not then you loose. The game has needed more objective game modes for a while now I think. Endless mode will still feature of course, but the addition of this will allow me to have proper levels and make some proper challenges in the story mode also.

I’ve also started implementing some requested keyboard control with cursor key and wasd scrolling. I want there to be a lot of different control options in the final game, including controllers.

This week I also finished the first iteration of the verses mode AI. There’s going to be a huge amount of refining and tweaking it, but it’s great to actually get a semi-competent AI in the game to play against for now. I don’t think it’s ever going to be able to compete with human players once they’ve started learning the game’s more intricate mechanics- there’s just too many crafty combos a human player could put together to outfox the AI. It has managed to beat me once as of last night though, and it’s come close several times, even though I’ve not had long to test it! For some reason the AI currently really loves farmhouses.

But wait there’s more! There’s finally some finished character details to share with you. I figured I’d introduce each playable character as their skill tree is completed. As of this update, the first playable character -Laney, is ready and in-game.

Karl, my character artist has completed all the pieces for the 8 characters and I couldn’t be happier with them!

Laney Thompson is the city’s Architect. As a result her skill tree focuses around this, and features lots of perks to buff buildings.

The other focus of her skill tree is culture. Laney gets access to buildings such as an Arthouse Cinema, a Ballet School and ulitmately the Opera House. The cultural buildings & skills are based around deck control. They have effects such as increasing your playslots from 2 to 3 and removing unwanted cards from your deck.

Being one of the starting characters, I wanted her skill tree to be simple, straight forward and easy-to-play. She should be able to hold her own in versus mode too.

That’s all for this week- I hope to see you at Rezzed, where Concrete Jungle will be part of the Bafta Inside Games Arcade!