Hello everybody! It’s been almost a week since the kickstarter ended, and what a week it’s been! I’ve mostly been continuing work on the game- the building count now stands at 55. But more importantly, I’ve been collecting lots of great feedback from the preview version.

There’s no shortage of good ideas from you guys, that’s for sure. There are lots of little confusing elements that I need to clear up in the final game- things which are unclear in the tutorial, or gameplay elements that are confusing at first. Thanks for pointing those out, when you’ve been making a game for a long time things like this become invisible. It’s valuable feedback.

I’ve been putting requested changes I think are good (which are 90% of them!) Into a list I can work down. I’ll share with you some significant ones in this update.

I’ll start with UI changes, proposed by Joel Finch. Joel even went out his way to do some mock-ups of his ideas, which I think are great. 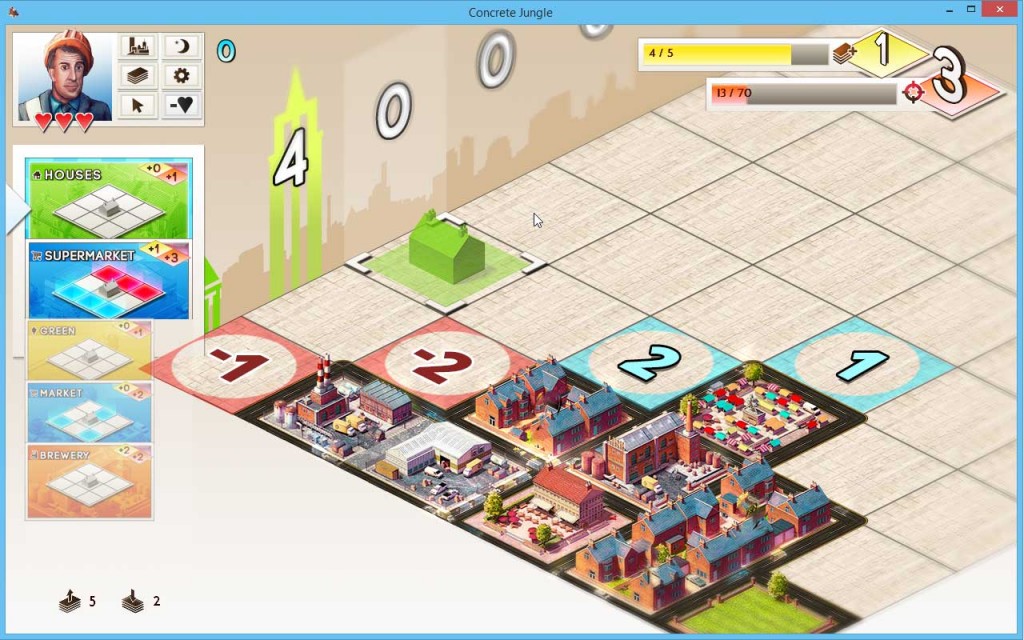 The main differences here are much clearer +/- squares. In the preview version, the closer to 0 the tile value is, the closer to white it is. Values become blue or red as they increase or decrease. This all sounds very well, but as Joel pointed out, most of the time values are quite low, so they stay very close to white- the only distinguishing feature being a ‘-‘ sign. By assigning a clear red for – scores and blue for + scores, things will become much clearer.

He also suggested having the empty tile scores lay flat against the isometric plane, which I like a lot as you can then distinguish them more easily from building scores. 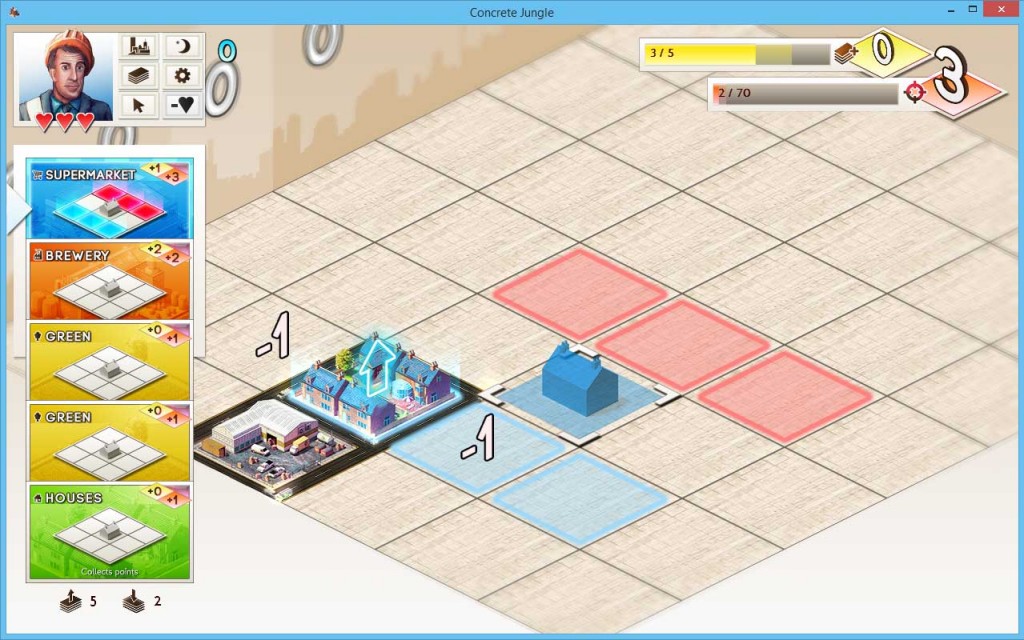 Lastly, there’s a clearer highlight when a spacial effect applies to a point scoring building. I love those arrows! He also made the point that displaying individual building scores is not strictly necessary in the ‘normal’ game mode, so I think I shall include a toggle for them in the top right button panel.

Moving on to some game mechanics, there has been lots of input regarding the ‘buy phase’, and deck building. I’m going to give the system a bit of an overhaul, and try some new things with it. One thing I think is a must is having an option to delete any card in the deck list in exchange for a ‘buy’, instead of adding one of the four cards. The game needs more control in deck building as at the moment it can feel a bit aimless later in the game. I want to make the process more dynamic and fun- it needs to be easier to swap cards and upgrade them instead of just making a huge deck with some good cards and a lot of average ones!

I’m also thinking about having an option to gain a life by using a ‘buy’, up until a maximum. To stop this becoming a bit too easy, it needs to be quite strictly limited though. I’ve got some other ideas to test when it comes to deck building- some more developed than others. It’s a tricky thing to get right, and in the preview version, it’s definitely an area that needs work.

I’d like to mention the preview build was really only meant to feature the ‘basic’ cards- there’s a lot of cool stuff planned for the full game, which will also help the deck building be more dynamic.

I’ll probably continue sharing the suggestions at a later date. There’s lots more, but posting all of them would take too long to write. So thank you all for your feedback! If you’ve posted it here, messaged/emailed or posted on the forum- I’m pretty sure I’ve read it and it’s very likely your feedback is in my ‘list of suggestions’ file.

This week I’m also going to be starting the implementation of the versus mode. I have a hunch this may actually be the game mode most people will like to play above the current one. It’s shaping up to be really cool already, and as soon as there’s some AI to play against it’s going to be something special. That AI is no easy task in a game like this though, I have my work cut out for me.

Edit: Also this week I did an interview with Cameron Long from ‘Here are Words‘.

As always, I’ll sign off with a few new buildings!