This week I’ve mostly been eating too much chocolate, but also working on Sleigher the husky sled game. Mostly in the graphics department. Here’s some boats: 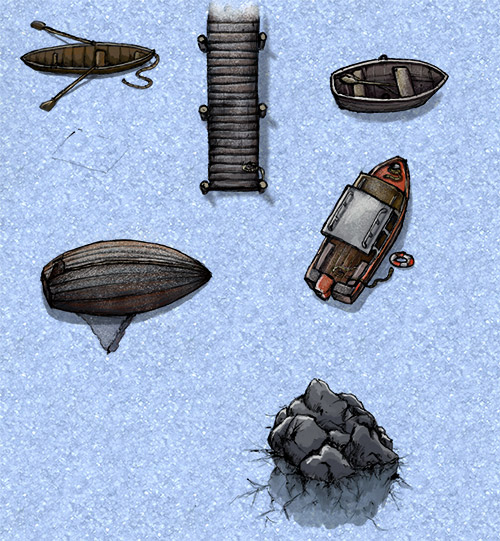 It’s going well. Pouring detail into the various objects you can smash through I think is the key to it’s success, as it makes it fun to play. I’ve split up the randomly generated terrain into several sections; Tundra, Ice lake, Town, Winter Sports Resort, Mountains. There might be more of them to come, but those cover all the ‘wintery’ themed things I can think of. Expect to smash through houses, trees, ski jumps, ride on bob-sleigh tracks, outrun avalanches etc. It’s going to be a lot of fun, I can promise you that.

I’m thinking of going free-to-play with this, at least on iphone with iAds. Then having an option to buy it and remove the ads, and perhaps unlock some more features. This option will be in the lowest price bracket, so $1 or equivalent. I think this should be good though, as everyone will have a chance to play it properly without spending anything.

My game MegaCity has just hit the Xbox live Indie marketplace! I’m pleased to announce it plays really well on 360, so I’m going to be linking to it like crazy from now on. Really, you should try it out, it’s only 80 points. Go on, I’ll be here. Waiting.

In other news this week, I’ve been doing some more work on Sleigher, the Android version of MegaCity, and Planet Wars. So a little bit of everything.

MegaCity will be hitting Android, and also Windows Phone 7 later this year (hopefully before the summer). Stay tuned. It’s all possible with the hard work of Clickteam who make the software I use to make my games.

Also, I’ve changed the comment system on this site. Previously you had to log in which I realise that was a bit of a hassle for most visitors who probably come here in passsing. I had to do that because I was getting a lot of spam, but I’ve recently got a WordPress plugin which can apparently tell if you’re a pesky bot. Yeah bots, what are you going to do about that? You certainly won’t be commenting about it that’s for sure. Unless it doesn’t work. I challenge you!