Just a small update this week. Six O’clock High has been coming together nicely though. I’m in the middle of adding a little story element which is told through graphic novel style intermissions (in a similar way to planet wars). I’ve also done some currently unfinished character art for the two main characters.

And most importantly, I’ve added Zeppelins!

In the week ahead I’ll be finishing the art, optimizing performance, general bug fixing and polishing before attempting to make some background music. Erk, that’s going to be either a lot of fun or a complete disaster. Maybe both? 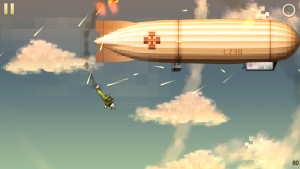