I’ve been getting closer to my milestone of having something playable to show off, but the things I’ve been working on have mostly already been mentioned in previous blogs. So I’m going to use this post to talk about world building– something I enjoy immensely (and something I didn’t get to do much of for Concrete Jungle). Specifically, this post is about my inspirations- hopefully, you’ll get to see inside my head a bit and get a better picture of what Shadows of Doubt will end up looking and feeling like.

You may have noticed from Concrete Jungle, I’m a fan of vivid colours. With this project being very firmly rooted in the noir genre, something famous for it’s black and white cinematic origins, the question is how do I translate that passion for colourful visuals over to this project while keeping that edgy atmosphere. In this post, I’ll share some of my visual inspirations that will shape the game’s world. Please note that the pieces of work shown in this post belong to their respective authors, and have nothing to do with me. I’ve referenced pieces from their social media where possible, so check them out!

I’m going to start with one of my initial influences, John Atkinson Grimshaw, who is famous for his nighttime victorian urban landscapes. There’s something about those colours- often dreary blues, greens or purples contrasting with the warm cosy lights of the buildings that I adore. There’s a lot of rain and haze in his work too- he fits really well with the noir presence I want to capture; a bit melancholy, a bit harsh and industrial, but not without warmth and humanity.

I could quite happily cite almost everything from Masashi Wakui’s incredible collection of neon-drenched Tokyo photos as inspiration. Beautiful nighttime images, but bursting with colour from the neon signs. Much more vivid and sharp than Grimshaw above; I’d ideally like my game to find a middle ground between the two.

Yoshito Hasaka’s photos are of a similar subject, but his colours lean towards the pastel colours of anime.

I haven’t shared much on the setting yet- but although right now it looks slightly Victorian/steampunk, the game will actually be set in an alternate-reality, hyper-industrialised 1970s-80s. Imagine the tech from Blade-Runner a decade earlier- maybe akin to Terry Gilliam’s Brasil. Futuristic but analogue. A weird mix of technology and machinery, halfway between steampunk and cyberpunk. In some areas, technology has reached or surpassed what we have today but in other areas it lags behind. This allows me a lot of opportunities to get creative and imaginative and doesn’t restrict the kind of technology I might want to include. The films I just mentioned are obvious influences, but as well as the classic noir location tropes (dimly lit Americana diners, smoke-filled rooms and rainy windows) I’m also looking to capture something more unique in some of the interiors…

There’s something about a highly stylised 60s/70s interior that can be extremely unsettling, probably in most part due to the films of Stanley Kubrick. The gaudier side of it has gone heavily out of fashion since (for the most part), especially in the world of interior design. That gives it a slightly alien quality that could work really well with the concept of this game. It’s a kind of style that I haven’t really seen in video games before- the only thing coming to mind are the No-One Lives Forever games, and even then the tone of the game was so geared toward comedy that it didn’t convey what I’m describing. 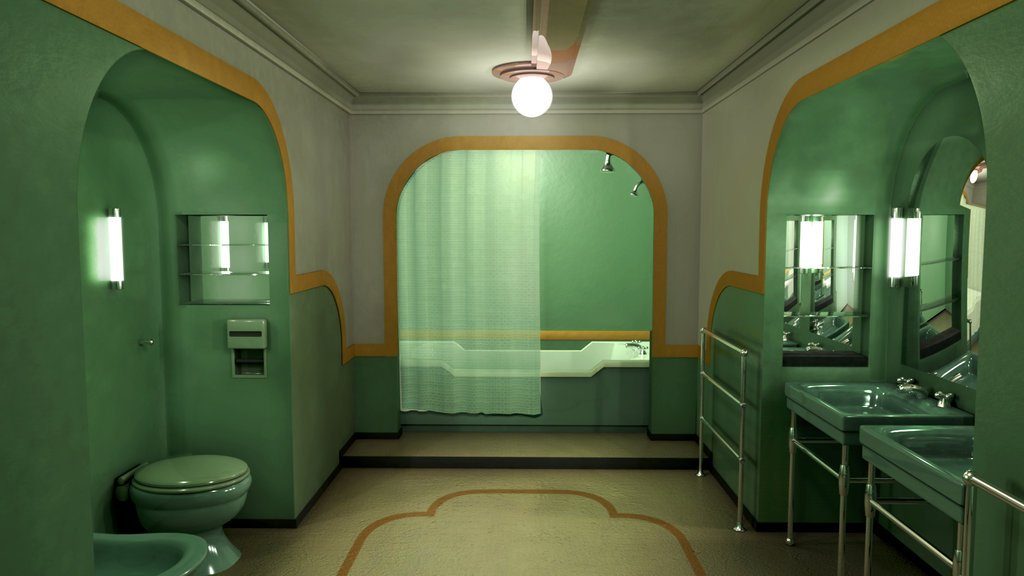 So there we go- a rather odd collection of images that might give you some clue as to what I’m going to be trying to conjur up with the visuals of the game. Next time I should have some more development on gameplay to share. At last!