It’s been a little while since the last update, and I thought I’d better do a ‘hello 2019’ style post, even if it’s just to look back on later in the project. This is less of a ‘roadmap’ and more of a dirt track map by the way. If there’s one thing I’ve learned from the project is that it’s really hard to predict in terms of timeframe– a common game dev problem of course, but still a much harder thing to do for this vs Concrete Jungle.

With that said I’ve decided on a few things for the future development of the project. I have decided to aim for an early access model as it seems the best fit for this ambitious style of game that could potentially take a very long time to completely finish. I have some mixed feeling about early access as a gamer, but for this type of project the positives outweigh the negatives: It allows passionate fans to play the game and help shape the direction of the remainder of development, as well as providing some income security. I’m going to be very cautious to make sure I don’t release something under-baked or something I wouldn’t buy myself, but I believe when done right early access is a win-win. 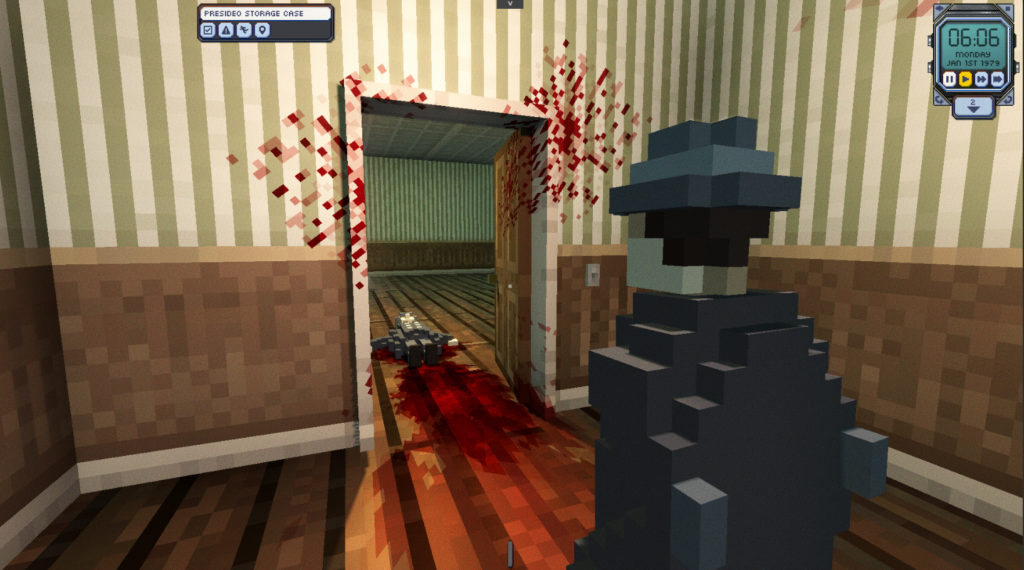 You might have read in my last post, that I was quite eager to finally get something playable working so I could focus on some of the other things that really excite me about this project. I did get my checklist mostly completed before the end of the year, but sadly that work was met with some disappointment on how cohesive and fun the game is feeling. I need to remedy this before creating my planned demo/reveal video– so that’s on hold for now.

My main problem is that the most impressive and fun features aren’t a big enough focus of the gameplay:

Stealth is something that’s been added in the last month and has instantly given the game a much-needed injection of peril. Breaking into people’s apartments is fun! Who knew? They should make a game about that, maybe set in a steampunk/medieval world, and have the player be some kind of burglar or something. The problem here is giving the player enough reason to go into places they shouldn’t. As a cop, it makes sense that you basically have or can get access to anywhere relatively easily. Police detectives don’t really break into people’s apartments, and even the bad-cop ones don’t really have a need to even do it that often.

Procedural Generation & Simulation. The real joy in working with procedurally generated systems, for me at least, is clicking that play button and exploring what’s been created. There’s a dr Frankenstein-like joy to seeing what the thing you’ve created has created. There’s also the universal appeal of knowing that your game instance is special, unique to you– and therefore your experience is unique to you.  The game does an ok job of this right now- there’s plenty to research and find, but the problem is that there’s a huge amount out there that the player has no reason to explore, and it feels like a wasted opportunity.

So what’s the solution?

The solution lies in one of my all-time favourite games, an 18-year-old RPG called Anachronox. Flawed, but bursting with character and awesome ideas, Anachronox has always been a source of inspiration for me. Spoilers ahead: I could write a lot more about how one of your party members is an entire planet of technologically advanced aliens that shrunk itself, or how the starting area’s frequent tectonic plate movement is used as a form of public transport, but I digress.

Fairly early in the game, you learn of a man who deals in information– someone who digests vast quantities of personal information and divulges it for personal gain. He’s who people come to when they need to know something. Like some black market celebrity, he features on swathes of graffiti throughout the city; ‘Eddie Knows’. When Anachronox was made, personal information was considered to actually be private, so the idea of an individual using huge quantities of personal information for personal gain was almost as science-fiction as the other things I just posted about. Oh yeah, he also has to chew on something stinky and chewy– like an old puss infested sock– to help him concentrate and sift through the vast amounts of data in his mind. But that part isn’t relevant here, just Ananchronox being weird and wonderful!

The key concept though is personal information as a commodity in a pre-social media world. After some thinking, it’s pretty clear that this game should really be about snooping around people’s apartments and workplaces to find information about them without getting caught. Instead of a thief stealing valuables, you’re stealing information. Not all of this information will be relevant to your case, maybe even most of it won’t, but that’s ok because I can assign in-game value to all information and reward the player for finding it. It’s not a very lawful thing to do, so I’m thinking about changing the player from police to a PI, and have information harvesting as a kind of secondary objective.

This pivot gives centre-stage to the proc gen, as you’ll discover affairs or secrets that could be sold to the right people. It’s quite a deliciously shady angle on the detective theme that I think with enough attention to detail could be really cool. Giving the player command of moral choices is always interesting.

So with all this in mind, what’s my course of action?

Currently, I’m working on rewarding the player for finding information and punishing them for getting caught.

Switch the project to unity’s HDRP.

To make the stealth interesting, I need to start thinking more about the environments. Rooms and buildings need multiple entrances and exits (think air vents, windows, fire escapes etc). I’ve got plans to overhaul the generation of interiors that I’m super excited about.

I want to get a Steam page up as soon as possible.

April 4th: Rezzed 2019. I’d love to demo the game at Rezzed, but getting something presentable enough to demo in time will be very tough.

Expansion of citizen models and visuals; there’s a tonne of data being simulated but none of it is visual right now because I only have 1 basic character model.

Expansion of exterior models- there’s only 1 building model in the game at present.

Expansion of AI behaviours. What I have is a decent foundation, but I need to work on their routines to give the player more interesting stories to discover.